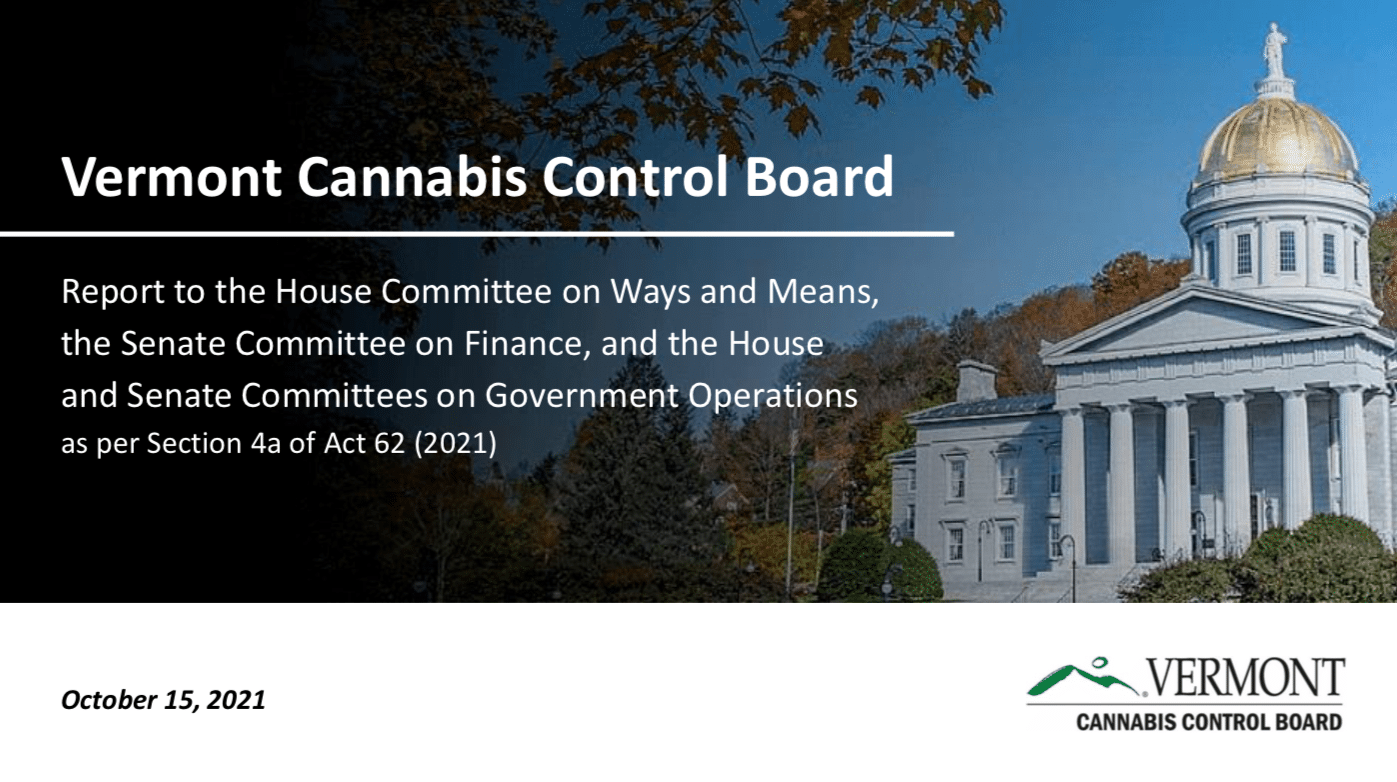 On Friday, October 15, 2021 the Cannabis Control Board published their final recommendations to the legislature. The report includes language on supply and demand, license types and structure, fees for each license, justifications for those fees and qualifications for social equity applicants.

After weeks of discussion between the Board, it’s six sub-committees, two out-of-state consulting firms, VS Strategies and the National Cannabis Business Association, and the general public, Vermonters are finally beginning to see a comprehensive view on what our recreational cannabis market will look like. This report is the most integral piece of information regarding Vermont cannabis since Act 164 became law.

Vermont NORML is pleased to be able to accurately report on the details of this report for Vermonters.

VS Strategies was put in charge of creating a supply–and–demand model for Vermont’s market. The following model was constructed utilizing population data (county and local), cannabis use frequency (state and local), seasonal tourism rates, and seasonal demand trends in existing cannabis markets such as month-to-month shifts in consumption. 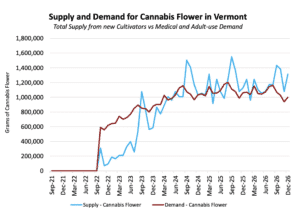 The above model predicts that when all retail operations open online in October 2022 there will be a flower shortage of approximately 300,000 grams. The shortage is caused in part by the excitement and rush to buy that corresponds with market commencement and the lack of legacy flower allowed in the market. Supply will not catch up to demand until almost a year later in August 2023. At that point supply will overtake demand. Supply of flower at any given time will vary based on total square feet of cultivation, harvest season/yield, and allocation of oil to manufactured products.

Total projected sales were calculated using a complex array of data sets, similar to that used to determine canopy size in the supply-and-demand model. The model predicts a decline in sales by 2026 after doubling between 2023-2024. The decline in retail sales can be attributed in part to the emergence of neighboring cannabis markets in New York and New Jersey coming online around that time.

An integral part of this report is language around licenses for all cannabis businesses. According to the report, “The CCB’s license and fee recommendations are designed to foster a legal cannabis market that reflects Vermont’s culture and embraces its strengths. To promote an equitable and accessible industry, they include license types focuses on providing access to:

Five separate but integratabtle licenses have been laid out in statute: cultivator, product manufacturer, retail, wholesaler, testing laboratory, and integrated license. The cultivator, retail, and product manufacturing licenses are unique in that there are separate tiers within each license. Cultivator license tiers for indoor and outdoor are broken down as follows:

Indoor tier 6 will not be available for application initially. Tier 6 will be considered by the Board for approval if additional supply is needed to meet demand, or at some point in the future.

One of the more anticipated aspects of the report was the definition of a “small cultivator” and the limitations around the indoor 1000 ft2 tier. Small Cultivator is defined as “a cultivator with a plant canopy or space for cultivating plants for breeding stock of not more than 1,000 square feet. ‘Plant Canopy’ is defined as ‘the square footage dedicated to live plant production and does not include areas such as office space or areas used for storage of fertilizer, pesticides, or other products.” What the report fails to shed light on, is the ability to do nursery related operations outside of the 1000 ft2, something a lot of cultivators were hoping for.

A mixed tier consisting of indoor and outdoor cultivation is also being considered according to the report. “Licensees would have the flexibility to grow how they choose and the ability to continue cultivation during the winter when outdoor growing in Vermont is impossible.”

Retail licensees will not be limited to only selling traditional cannabis products such as flower, pre-rolls and edibles. The Board has offered the opportunity to acquire a nursery retail license to sell seeds and clones. This could be tacked onto an existing nursery or be a stand-alone business.

The tiers for product manufacturing licenses, which allows for the production of edibles, concentrates, topicals, and more are based on the extraction method, namely the presence of solvents:

With a stated goal to, “help build the Vermont cannabis industry in a way that stays true to the culture of the state and furthers the goal of creating an equitable and accessible market” multiple future license types are being considered by the Board.

The report mentions the potential for the following license types to exist in the future:

The fact that any (or all) of these license types could become a reality is both exciting and necessary. Because of its natural beauty and multitude of available outdoor activities, Vermont is a state that relies, in large part, on tourism from both in and out-of-state individuals. Licenses for events and on-site consumption have the potential to create a booming canna-tourism sector that could effectively stimulate the economies of many smaller municipalities which may lack other traditional cannabis operations. As for delivery licenses, consumers, particularly from more rural areas of Vermont, may find it difficult to access their cannabis or medicine when it comes time to go to a dispensary. Delivery solutions would solve this inevitable issue.

In order to cover the Boards $2.8 million proposed budget, the Board must collect fees from licensees. However, due to the small size of the state, covering all costs through fee collection would result in unattractively high fees as compared to nearby states with cannabis markets.

Therefore, the report puts forward two proposals for structuring the fees for each tier of each license. Proposal A has higher license fees for applicants but would pay off the Boards deficit more quickly while Proposal B has lower fees but could require additional tax revenue to cover operating costs. We will break down each proposal, the justifications of both, and which one VT NORML believes would be best for Vermont cannabis.

The fees in proposal A would cover operating costs and provide enough additional revenue to reimburse the state for its initial funding of the Board within 10 years. The higher price tag under proposal A however could keep potential entrants out of the market and would make VT an outlier compared to other states. The fees are as follows:

The justifications for Proposal A is primarily to cover the operating costs of the Board. With multiple full time employees and 11 more to come, the $2.8 million budget would be covered in roughly 10 years under this proposal. It would, however, create barriers for social equity applicants and other market entrants who may have difficulty obtaining the capital needed to acquire a license.

Proposal B features lower fees and is meant “to balance the goals of generating significant fee revenue with providing low-cost entry into the market and keeping most fees competitive with nearby states with markets.” The fee schedule is as follows:

The primary justification for Proposal B is promoting easier market access as opposed to covering operating costs of the Board. Fees found in this proposal are similar to those of neighboring markets and would pose a lower barrier to entry for market participants. Proposal B is more likely to foster a diverse and equitable market than Proposal A. VT NORML firmly believes that accessible market access for individuals and groups disproportionately impacted by cannabis prohibition must be prioritized thus strongly believe Proposal B is the more prudent option of the two.

Vermont NORML supports the Boards preference and logic in pursuing Proposal B. The Board states that with lower license fees, Vermont is significantly more attractive and therefore competitive with neighboring states with legal markets, both active and in the works (as is the case with New York). They correctly recognize that covering the Boards operating cost as soon as possible is NOT a top priority. Instead we should be keeping Vermont competitive and attractive to legitimate entrepreneurs who want to bring revenue to Vermont’s economy and the state.

This is not a market which will dissolve in a decade. Once retail cannabis is operational, it is here to stay and the Board will find, in over 10 years time with Proposal B, that adopting lower fees now will prove to be beneficial in the long run by fostering innovation, collaboration and more generally, equitable participation in Vermont’s cannabis market.

Vermont NORML strongly believes that those who have been disproportionately impacted by cannabis prohibition, systematic racism, and socioeconomic discrepancies should be given priority when entering the market. The leading reason a Cannabis Control Board exists in the first place is to ensure that the regulation of the cannabis market- beyond issues such as canopy size, testing requirements, and license structure- honors the devastating and life-altering impacts of the failed War on Drugs. VT NORML Executive Director, Nicholas Schuermann, has stated this numerous times in public comments during Social Equity sub-committee meetings. We are so grateful to know that the CCB understands this and works to prioritize it!

With that in mind, it is integral we take the historical and political context of cannabis into consideration when structuring our market, and more specifically our social equity program. While the exact definition of a social equity applicant was not defined in the October report, the Board has considered the following criteria.

A Social Equity Applicant is defined as someone who:

There is no residency requirement for Social Equity Applicants. Read the recommendation report from the Social Equity Sub-committee to the CCB.

The report does, however, touch on something integral to a robust social equity program: waived license fees. Anyone who qualifies as a social equity applicant (a separate process from being granted any business license) would pay $0 in license fees in the first year with 25% of the fee being added for each subsequent year. See the following time table: 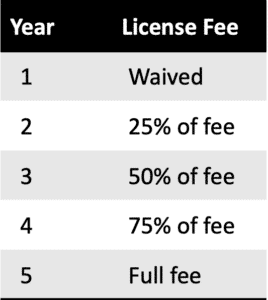 Contrary to the belief of some, social equity applicants are not in the business of Vermont cannabis to get a “free ride” into the market. The truth is that striking application fees will provide marginal savings in the overall costs in what is required to get a cannabis business up and running. Vermont NORML is strongly in favor of waiving as many fees as possible for social equity applicants while providing as much support as needed to be successful.  This program is targeted at communities who are currently experiencing multi-generation harm from cannabis prohibition, meaning access to capital is greatly limited. As we see it, waiving application fees for equity applicants is a small drop in a much larger bucket. 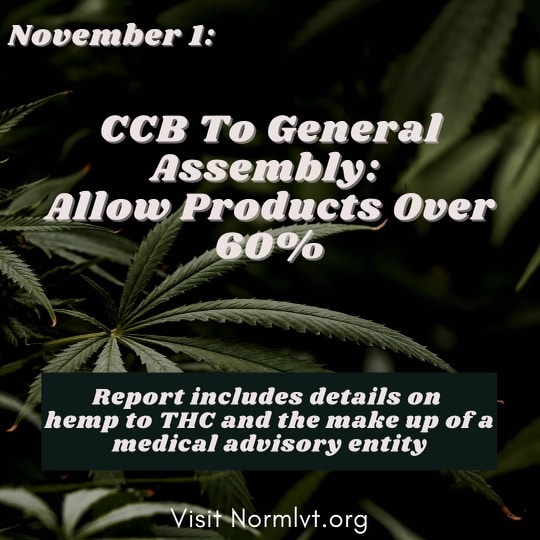