Montpelier, VT — On November 1, 2021 the Cannabis Control Board made significant recommendations in a seventeen page report to the General Assembly. The report discussed a controversial cap on products <60% THC, the conversion of hemp to THC, and the makeup of a Medical Cannabis advisory entity.

The purpose of the report is to inform the General Assembly of the Boards on these issues as required by statute in Act 62.

Distillate:  a concentrate where a segment of cannabinoids from an initial extraction are selectively concentrated through heating and cooling, with all impurities removed.

Isolate: a concentrate that is more than 95 percent composed of a single cannabinoid compound created by a chemical process.

The CCB recommends that licensed cannabis manufacturers be able to produce the above products (concentrates, distillate, and isolate) at, or over, 60% THC.

THC extracted from the cannabis plant is, by nature, greater than 60% THC. In the interest of consumer safety, the Board worries that a 60% THC cap could result in more harmful concentrates, a main ingredient in manufactured cannabis products. Should a manufacturer/extractor produce a product over 60% with the cap in place, they will be forced to use potentially harmful additives to dilute THC levels to meet the legal limit.

“Cutting a natural concentrate with an adulterant could make the end product more dangerous, as additives can be potentially harmful to consumers,” the report reads.

The report also recognized the financial burden associated with a 60% cap. By forcing manufacturers to dilute products to the legal limit, it increases their production costs which will ultimately burden the consumer.

The report additionally asserts that should the 60% cap be lifted, products over that threshold should only be sold to adults 25 years or older.

Citing a legislative intent in Act 62 and other cannabis legislation, which states that it’s in the interest of the state to move as much of the illicit market into the retail market, the Board believes a 60% cap would be in direct conflict with this intent. The Board acknowledges products <60% are widely used by Vermonters. Therefore, should the cap remain, the Board believes it opens the flow of products from the illicit and out-of-state markets which allow products <60% THC.

In the interest of consumer safety and state interest, lifting the 60% ceiling would help prevent unlicensed facilities from manufacturing potentially dangerous products, using unregulated methods and inputs, and greatly hinder the influx of out-of-state products.

In April 2021, the manufacturing of Delta-8, a relatively mild psychoactive cannabinoid, was deemed illegal by the Agency of Agriculture’s hemp program. Specifically, the program stated any synthetic product, including Delta-8, was illegal due to the fact that it’s not naturally occurring. This ruling was controversial to say the least, making life difficult for all of Vermont’s hemp producers. The Board, in its November 1 report, speaks on the future of the ban.

“The Board, in consultation with the Agency of Agriculture, recommends that the jurisdiction of the CCB’s cannabis program encompass the manufacture and sale of products containing Delta-8, Delta-9, other Deltas, and future synthetic cannabinoids with similar properties, whether they are derived from hemp or from high-THC cannabis.”

Similar to the 60% cap on concentrates, the Board believes it is in the interest of consumer safety and the state that the Board regulate these products opposed to restricting them. It is a basic argument many advocates voiced during prohibition: people are going to seek it out regardless of its legal status. Regulating it and legalizing it makes for safer products and ultimately consumers safety.

“This report is a good start.  It has good spirit, which will set a precedent of good spirit in the future.  That is an important mindset shift for the public and government to view cannabis as a therapeutic and recreational drug, not as poison, and to view its users as people, not criminals. I also appreciate how synthetic cannabinoids were not left unacknowledged; this is an aspect that is ignored and I think the language needs to be adjusted to account for the complexity that occurs in cannabis chemical systems.”

In supporting the decriminalization of Delta-8, the Board intends to develop a unique license for hemp producers to synthesize their products for the adult-use market.

The Board released language on the future of a separate advisory board for the Medical program. This following outlines the boards recommendations on the makeup the Medical Advisory body:

Each member will serve a term of three years while being restricted to a maximum two terms.

The report also outlines the following goals under which the Board envisions the advisory entity to operate: 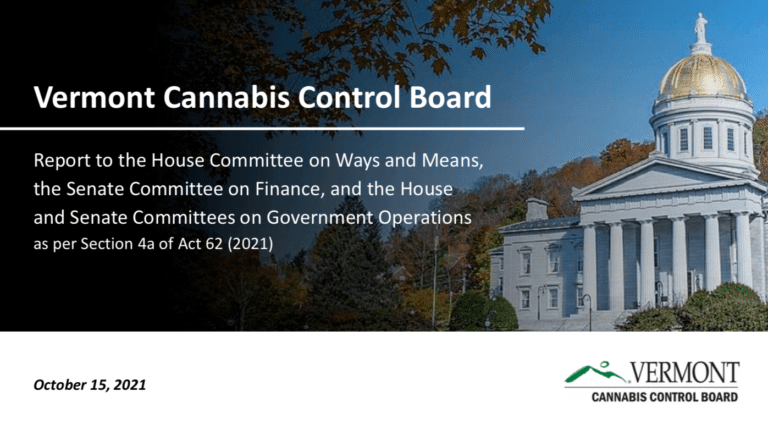